A Place To Call Home Part 2: Home Is Where Dreams Become Pillars 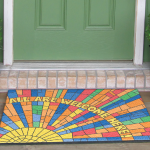 A Place To Call Home Part 2: Home Is Where Dreams Become Pillars

A Place To Call Home
Part 2: Home Is Where Dreams Become Pillars

It has been said that we create our tomorrows by what we dream today. What’s in store for you tomorrow? Well, what are you dreaming today?

Of course, it’s not just big dreams that make for better tomorrows. Lots of people are happy to tell you all about their grand vision of the future. They talk on and on about their dreams of an ideal world where children don’t go to bed hungry because prosperity is the norm; where nations lay down their arms against others because peace is the norm. They expound upon their ideas for overcoming racial divides, ending homophobia, and Islamophobia, and lightening our impact on the earth. I suppose we could all expect to live in such a world down the road if it weren’t for one big problem: We don’t create our tomorrows merely by what we dream today. We create our tomorrows by acting on those dreams.

Acting on dreams is difficult. If it weren’t hard, we’d all be living in paradise right now wouldn’t we? Creating a better world means changing the world we’re in, and there are reasons why the world is in its present state. Warfare, environmental degradation, poverty, and fear all have their beneficiaries who are in no hurry whatsoever to change the system. And they rely on the fact that when most of us encounter resistance, we stop acting on our dreams and content ourselves with merely talking about them. So there is this perpetual illusion or ruse we all play where we get to feel good about ourselves for standing against this-or-that, or for this-or-that, all the while never actually having any intention of doing anything but talk about our beliefs.

The truly sad part of all this is that history shows that when better tomorrows do, in fact come, they rarely come about through large numbers of people making dramatic shifts in society. Rather, they come about through relatively small numbers of people making small efforts, but with enormous faithfulness. While their efforts may seem small and even somewhat insignificant compared to the vision they are working towards, it is their doggedness and determination to move molehills, not mountains, that collectively amounts to moving entire mountain ranges.

Case in point: Jacob. Jacob was the grandson of Abraham, whom three of the great world religions count as Father of their faith. While Abraham gets all the glory for his role as Father, if it weren’t for his grandson, Jacob, and his faithful efforts to follow a dream he felt was from God, it is possible that there would be no such thing as Judaism, Christianity, or even Islam.

It all can be traced back to Jacob’s dream. And to Jacob’s faithful response to this dream.

In Jacob’s dream, he saw a ladder set up on earth reaching into the heavens with angels ascending and descending it. As he marveled at the vision, Jacob heard God tell him that the ground he was lying on was being given to him and his offspring, who would be like the dust spreading throughout the earth from north to south, east and west. Further, Jacob was told that through him and his offspring, all the families of the earth would be blessed. So the vision wasn’t just for Jacob and his family alone, but for all of us.

Wouldn’t it be great to live back in biblical times when the voice of God was so easy to hear and understand? I mean, who wouldn’t follow a dream – come hell or high water – if one had such a high degree of certitude that God had spoken? Absent such certitude in our day, who can blame us for just sitting around talking about changing the world rather than doing much about it?

Before you sit back in your easy chair, however, consider this: Jacob was no more certain about the vision he had than you and I are about the visions we have. What distinguishes Jacob from the rest of us is not the degree of certainty he was given, but his determination to test the vision amidst high uncertainty, then commit himself to the vision – come hell or high water – once he became convinced it was from God.

Did you notice all the conditions Jacob places on God if he is to act on his dream? Jacob vows to follow but only under three conditions which are meant to provide confirmation that the vision is really from God, and that God was willing to be faithful to the vision as long as Jacob was:

(God must ABIDE with Jacob on his journey)

(God must PROVIDE for his basic needs)

(God must ensure that the conflict between Jacob and his father’s household,
e.g., Esau, will SUBSIDE)

If and only if Jacob receives confirmation that his vision was from God, then Jacob vows to act on his dream rather than merely talk about it:

(Jacob will DIVIDE his wealth, keeping 90% of everything he has and tithing 10%
to carry out God’s mission in the world)

The vows Jacob makes are neither to change the world, mind you, nor become a blessing to the world as his vision indicates. This would be far too great a task for anyone to handle. Instead, Jacob vows to do three things that are completely within the power of any of us to do provided we have the will to do it. Who among us is incapable of choosing to follow God over the many gods our society worships – especially if we aren’t expected to be any more perfect than Jacob was (he had plenty of shortcomings …)? Which one of us is incapable of contributing a pillar to God’s sanctuary – especially if God provides the pillar? And when it comes to the financial resources God provides us, who among us is incapable of devoting 10% to serving God’s mission in the world, and who is merely unwilling?

Are you beginning to see how the difference between Jacob and ourselves is about faithfulness more than grandeur of vision? It’s not about how much more extraordinary his achievements than ours. You and I are perfectly capable of living lives that are every bit as godly and heroic as anyone in the Bible. We really are! All that is required is extraordinary determination and commitment to doing the small things that are perfectly within our power to do.

A few of you have been living like biblical heroes for a great many years. If I asked you to raise your hands and identify yourselves, you would be the last to do so and probably wouldn’t think you were remotely worthy of this distinction, so I’ll not ask for a show of hands.

Yet if I were to shorten the timeframe from many years to the last couple years, asking those of who have been living like a biblical heroes to raise your hands, everyone’s hands should be held high. True, we may not have reached the heights of Jacob – yet – but we’re about to quite soon.

Just like Jacob, we had a dream two years ago that suggested that Countryside and her people had a mission and purpose to fulfill, given to us by God, that would bless us, our families, our community, and even the world. That vision was the invitation to become the Christian partner in Omaha’s Tri-Faith Initiative. As one of the most important steps toward interfaith fellowship and reconciliation that the world has seen in over eight centuries, many consider the Tri-Faith Initiative to be the most inspiring and dramatic ways a faith community can work to fight widespread violence and secure peace in our world. In the words of a New York journalist to one of our parishioners recently, “Do you guys have any idea how BIG this is?”

Yet like Jacob, the Tri-Faith vision did not come through a divine voice booming from the heavens telling us in no uncertain terms that this vision was from God. Jacob’s vision came in the form of a strange dream as he slept in the desert using a rock for pillow. In our case, the dream came through an offer from the Episcopal Diocese of Nebraska to take their place as the Christian Tri-Faith partner. Over the course of the coming year, with lots of congregational discussion, prayer, reflection, and discernment, the dream gradually unfolded before us, clarifying itself and taking on an energy that lifted the hearts of many. In fact, many reported never having experienced such an exhilarating – and terrifying – sense of God’s call to them personally.

Almost exactly a year ago today (April 12, 2015), Countryside Community Church, like Jacob, vowed that if our dream was really from God, we would head God’s call to build a new and beautiful sanctuary on the Tri-Faith campus.

Now here we are.

We have had nearly a year to test the dream to make sure that it is real, rather than a product of ego or unfounded idealism. So I ask you this question: This past year did we, or did we not, receive the exact same confirmation that inspired Jacob to move forward boldly and faithfully turn the pillar he had laid his head upon into God’s sanctuary?

Did God PROVIDE for us? Many people – especially those outside Countryside – claimed that the Tri-Faith Initiative was like a cornerstone that should be rejected. They predicted that Countryside would explode in conflict and implode under the financial strain of people leaving the church. Look around you now. Did the sky fall down on us? On the contrary, a number of Countrysiders who voted against the move have epitomized the beauty and majesty of the Congregational way of governance. Despite their personal doubts, they trusted the will of the majority of the congregation. And while some beloved members did leave, already we have been joined by half-again as many individuals who have joined and submitted pledges in support the dream!

Did God cause conflict to SUBSIDE? Again, look around you. Does this look like a congregation crippled by irreparable conflict? Yes, we move forward with a slight limp, just as Jacob did (that’s another story …), but I can tell you with full confidence that in the eight years since I first came to Omaha, Countryside as never been stronger, or more united as a congregation. Can you feel the buzz on Sunday mornings? Or Wednesday evenings? For that matter, have you ever felt more alive and united within yourself in responding to God’s call?

If your answer to the above questions, like mine, is an enthusiastic “Yes!” then it is time to DECIDE that the God of Jacob – and Jesus – really is your God, more than ever before, and to determine to live a life of biblical proportions. This doesn’t mean doing enormous acts, but exercising enormous faithfulness.

It is time to DIVIDE your financial resources, keeping the lion’s share for yourself, but not shorting God one penny of what is needed to fulfill God’s mission.

And it is time to build a new sanctuary where God’s Spirit is pleased to RESIDE on the sacred ground of the Tri-Faith Initiative campus.

We do not create blessed tomorrows merely by what we dream today. We create tomorrow’s blessings by acting on those dreams faithfully, with the joy of our Creator in our hearts.