Living Liberty: A Christian Call out of Racism: Language: The House We Live In (Freed From: Passivity – Freed For: Engagement) 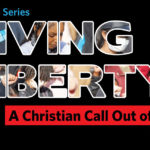 Living Liberty: A Christian Call out of Racism: Language: The House We Live In (Freed From: Passivity – Freed For: Engagement)

Language: The House We Live In (Freed From: Passivity – Freed For: Engagement)

2When the day of Pentecost had come, they were all together in one place. 2And suddenly from heaven there came a sound like the rush of a violent wind, and it filled the entire house where they were sitting. 3Divided tongues, as of fire, appeared among them, and a tongue rested on each of them. 4All of them were filled with the Holy Spirit and began to speak in other languages, as the Spirit gave them ability.5Now there were devout Jews from every nation under heaven living in Jerusalem. 6And at this sound the crowd gathered and was bewildered, because each one heard them speaking in the native language of each. 7Amazed and astonished, they asked, “Are not all these who are speaking Galileans? 8And how is it that we hear, each of us, in our own native language? 9Parthians, Medes, Elamites, and residents of Mesopotamia, Judea and Cappadocia, Pontus and Asia, 10Phrygia and Pamphylia, Egypt and the parts of Libya belonging to Cyrene, and visitors from Rome, both Jews and proselytes, 11Cretans and Arabs—in our own languages we hear them speaking about God’s deeds of power.”

I love this quote from Hafiz “The words you speak become the house you live in.” Hafiz, was a 14th century Persian mystic and poet.  Wikipedia describes him as someone who, “lauded the joys of love and wine but also targeted religious hypocrisy.”  I’m sure if Hafiz were alive today, He and I would be the very best of friends! In this quote, I think Hafiz captures, so clearly, the powerful role of language and how it literally creates the reality in which we live.

Early on in my study of Christian theology, I was struck by the use of parables by Jesus in teaching his disciples to look at the world in a new way, so they could imagine living into their lives in the most abundant way possible. The way Jesus used language to reverse or flip what the disciples “expected” to hear in order to surprise them with a new vision of what could actually be, broke open multiple possibilities for acting in the world. The messages Jesus presented in these powerful conversations literally changed lives and empowered all who heard to act in ways that showed God’s love and compassion for creation. When Jesus spoke to the importance of the one lost sheep or the lost coin, he reversed the thinking that majority rules, and expressed instead the importance of each life in the unfolding of all creation. In his parables of the unforgiving servant in Matthew, and the Good Samaritan in Luke, Jesus shows us that God’s activity is through mercy and compassion. We, then, as God’s children, are called to break down our categories of who is worthy and who is not in order to share that same compassion and mercy in caring for one another. And, in the parable of the Prodigal Son, we are shown a God, not of judgment and punitive justice, but a forgiving and welcoming God that is concerned with restoring creation and all the relationships within it.

These parables are just as powerful for us in breaking open our worldviews as they were for the disciples in the first century. In expanding our language and conversations with one another we are freed from standing in passivity while the world around us becomes too small for us to live with one another, and freed for openness to create new stories among us that present multiple realities for being and acting in the world that promote abundance of life all around us.

Believing that language shapes our realities, the Seminary I attended in Chicago in the mid 1980’s set out to change the language being used for both worship and instruction by encouraging what was then being called “inclusive language.” This type of language is intentionally choosing words that expand the use of pronouns, metaphors and broader descriptives in creating an environment where no one is marginalized or discriminated against because of their culture, race and ethnicity, gender, sexual orientation, age, disability, socioeconomic status, appearance and more. To achieve this community-wide intentionality, it would mean changing fundamental habits of conversation, and would mean expecting everyone in the community to consider the implications of their speech BEFORE they actually spoke. This was not an easy task, but the leadership of my seminary believed it was important enough to make the effort.

On my first day of orientation, the President of the seminary spoke to all in-coming students, declaring this policy of using inclusive language. He called us to holding each other accountable for using it, by actively pointing out to one another if we slipped: using a male pronoun for God, for example. And this accountability was expected for everyone in the community. The President gave us permission that day to openly (yet compassionately) correct any member of the administration or faculty if they used non-inclusive pronouns or descriptions. This is empowering leadership and seeking adaptive change in deep-seated behaviors, and it was particularly effective. All of these many years later, I’m still pausing before I speak to think about what I’m going to say, to better choose the words I speak to frame the most inclusive and abundant reality I can.

Language matters in shaping the realities we live in. We need to be intentional in how we choose the language we use. The Gospel calls us to this intentionality. If we are not mindful of how we speak to one another, and how we shape our culture through media and marketing, we will find ourselves living out a worldview we would not choose, or wish for. Our faith stories give us many examples of how our language can change our behaviors and open possibilities for relationships that would otherwise be stymied.

In our current situation of political polarization and the continual unveiling of racial inequalities, intentionality of language is more important than ever. Choosing your words carefully and holding others accountable for their language, as Jesus did, is an act of revolution in and of itself. Ibram Kendi, author of the book How to be an Antiracist goes out of his way to define the words he uses in his book saying, “Definitions anchor us in principles. This is not a light point: if we do not do the basic work in defining the kind of people we want to be in language that is stable and consistent, we can’t work toward stable, consistent goals.” (pg 17)  Kendi continues later saying “…when we realize old words do not exactly or clearly convey what we are trying to describe, we should turn to new words.” (pg 222)

Last week in this sermon series we discussed the idea of “diversity” in creation and I had all of my thoughts outlined on how God creates through diversity and how diversity is the exact reality that unites, rather than separates us. But, in reading the book White Fragility by Robin DiAngelo, I discovered how the word “diversity” is often used by the white community to prove exemption from participating in changing the inherent racism in our behaviors, rituals, and policies. DiAngelo explained that in using the term “diverse” the person who is speaking has automatically set themselves as the “norm” or “standard” for the additional examples being compared. So, for example, when I, as a white person, am in conversation on racial inequalities, and I use the term “diverse,” what I am saying is that My race, and My experiences of race, are the standard experience and everything else is “different” or “other.” Now, difference is in itself not a bad thing, but in our current context, we often experience difference as something negative or inferior in some way. DiAngelo explains it this way, “Differential treatment in itself, is not the problem… The problem is the misinformation that circulates around us and causes our differential treatment to be inequitable.” She tells us white people that when we use this term in conversations on racial inequalities, we use it as a way to shut down the conversation rather than bringing an open mind to the discussion.

So, after reading this, I am now aware of how my language might be perceived by others as intolerant and accepting of the status quo rather than seeking to change it. Should I go back and rethink how I am using this word and what images it provokes for other people who are listening to me? YES!

It is true that in my use of the word diversity, I am using God as the speaker and thus setting God up as the standard or the norm, not myself. So, I could have let it go. But when I went back to study the creation story itself I found that the language of Genesis does not describe the differences or variations of the created things, as much as it emphasizes the abundance or the expanse of God’s creation. Seeing this, I realized I could just as easily change the term “diversity” to “multiplicity” and avoid any offence or misinterpretation of what I was trying to say. So, I did. I hope it worked!

Language matters. Intentionality in learning from one another matters. Let us build houses to live in that are engaging and welcoming, to all of creation.