The Way of Jesus: A Journey Through Luke Part 20: What God Sees 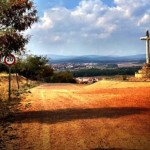 The Way of Jesus: A Journey Through Luke Part 20: What God Sees

The Way of Jesus: A Journey Through Luke
Part 20: What God Sees

Have you ever watched the game show, “Let’s Make a Deal”? Costumed contestants are offered a prize and given a choice whether to keep the prize or exchange it for a different, undisclosed item. I watched the show with glee as a child, when Monty Hall was the host. A couple years ago, I discovered the show had been revived. Chris Alexander’s daughter, Maddy, was actually a contestant – she even won a little money. This morning, I invite you to imagine yourself as a contestant on Let’s Make A Deal, only the host is God and you’ll have the opportunity to exchange the prize you receive for a different one that will be disclosed before you choose.

Prize #1: You’ll receive an all-expense paid trip to Heaven when you die! The only requirement is that you must meet Heaven’s stringent entrance requirements to enter. They’ll take a look at your soul and if you are sufficiently pure, you may enter through Heaven’s Gate. Again, all expenses paid.

Now, you can keep this prize or exchange it for Prize #2.

Which of these two prizes will you accept?

For those of you who are having a hard time making up your mind, you could always choose the last prize up for grabs this morning, Prize #3.

Prize #3: This prize has definite implications for Heaven, but the focus is on this life, not the next. With this prize you receive the absolute certainty that, despite all your imperfections, sins, regrets, and whatever burdens you may carry with you now or in the future, the only thing God will care about from this time forward is the light that is within you, not your darkness. This does NOT mean that God will accept any bad behaviors you may indulge in. Rather, it means that God will only seek to eradicate the darkness within you through growing your light into a brighter flame. In other words, with this prize comes no condemnation. Only God’s gentle grace and love from here forward – unto eternity!

Like Prize #2, this prize will also be given to everyone you know and love. The only restriction to this prize is that, in order to receive it, you must also allow God to give it to everyone you hate and everyone who has ever hurt you as well.

As with you and those you love, the others who receive this prize will not receive God’s blessing of bad behavior. It just means that God will only focus on their light in order to overcome their darkness. Their darkness will be dealt with through God’s grace and love, not punishment or retribution.

Now, which prize will you choose?

Of course, this is only a game. But there’s a significant dose of reality behind it insofar as the Christian tradition is concerned.

Some people believe that Jesus died on the Cross in order to offer the world Prize #2 – where only those who call Jesus their Lord and Savior receive the gift of Heaven. They say that Jesus’ death freed us from Heaven’s stringent entrance requirements by taking the punishment we deserve for our sins upon himself in such a way that, for those who believe in him, their sins are overlooked and eternal life is theirs. Those who do not accept his sacrifice on our behalf must still pass Heaven’s entrance exam. And to date, no one has been able to do it. So they go to Hell for eternity.

However, many other Christians throughout the ages have believed that Jesus came to offer us Prize #3 – where our relationship with God is defined by the light within us, not the darkness. In Jesus’ death and resurrection they believe that God offers a gift to the entire world, not just one for believers. Salvation is therefore for everyone, not just for a few. Many would also say that Jesus did not open the door to salvation, but rather he revealed a door that has always been open, at all times and for all people. You cannot overcome darkness with darkness, but only with light. Therefore the Cross was not God’s way of punishing Jesus on our behalf for sins he never committed. Rather, the Cross and resurrection are the surest signs that, even at our worst, God chooses not to punish us for our sins but continues to reach out to us, blowing on whatever light that is within us to overcome the darkness. God answers our sinful killing of God’s Anointed with resurrection … and Pentecost, showing that God’s love and grace – and God’s intention to save all people – are not thwarted by our sinful acts.

This is really the message of the first chapter of John’s gospel:

In the beginning was the Word, and the Word was with God, and the Word was God. He was in the beginning with God. All things came into being through him, and without him not one thing came into being. [In other words, all of God’s creations participate in God’s Light, not just those creations who hold certain beliefs.] What has come into being in him was life, and the life was the light of all people. The light shines in the darkness, and the darkness did not overcome it. (John 1:1-5)

So the way God chooses to overcome darkness – be it the darkness within you, or the darkness within those you love or hate – is with Light. God works with the Light that is within all of us, be it ever so small, and seeks to grow the light into a brilliant flame. It is no coincidence that when the biblical writers talk about the experience of Pentecost, they speak of tongues of fire that came over the people who had gathered in Jerusalem from around the world.

The fact that the Cross and Empty Tomb did not create a new reality but revealed an eternal one is found not only in the Gospel of John, but in our passage this morning. The story Jesus tells is about an incident in the Temple that happened before he died, not after. And when you read the story with Prize #3 in mind, the story suddenly takes on a resonance that is quite wonderful.

A Pharisee and a tax collector both walk into the Temple one day to pray. The Pharisee prays, “God, I thank you that I am not like other people: thieves, rogues, adulterers, or even like this tax collector. I fast twice a week; I give a tenth of all my income.”

The tax collector’s prayer is quite different. Beating his chest, he fervently prays, “God, be merciful to me, a sinner!”

The Pharisee’s prayer is full of self-confidence, self-righteousness and self-affirmation. But all this comes through comparison with the darkness he finds in the tax collector and other sinners. How different his prayer might have been if he had been standing next to true spiritual masters like Gandhi, Mother Theresa, or Dorothy Day – or the spiritual masters of his own tradition like Abraham, Moses or one of the prophets!

The tax collector’s prayer is one that any self-aware individual may have prayed if they were more aware of the light in others rather than merely their darkness. He knows that compared to many, his own light is puny. So he prays for God’s mercy – for God’s light to fill him.

The Pharisee’s prayer was focused on himself and the darkness he saw in others. The tax-collector’s prayer focused on God and the light he wished to receive from God.

In all likelihood, the Pharisee was a much “purer” soul than the tax collector. The Pharisee knew it, and thereby thanked God for his purity compared to that of the tax collector. He was rebuked not because he was less pure, but because for all his theological studies and ethical behavior, he failed to understand God’s nature, and what God seeks to give us in this life.

Prize #3 is for all people. God is not like the Pharisee, who looks at others and sees only their darkness. What God sees – that many others do not – is the light. The tax collector may not have been aware of his own light, but it is only the light within him that would have made him sorrowful about the darkness. God saw what neither the tax collector nor the Pharisee saw, and chose not to punish the tax collector for his darkness but to blow on the flame of the tax collector’s light, increasing it until it burned more brightly upon his leaving the Temple than upon his entering.

How might this story play out in your life today, if you accepted Prize #3 as opposed to the others, and trusted that when God sees you, God’s eye is upon your light? The story is played out in large ways and small ones everyday. An example of how this plays out in a small way can be found in the story of one of our congregation members this morning, Sue Coffey, who went out for a jog in the rain some time ago.

Having decided to get back into the practice of jogging one day, she went out in the wind and rain. Reaching her seventh straight mile, Sue was feeling pretty good about herself. How many middle-aged women are in good enough shape to knock off seven miles in the rain, she asked herself, giving herself a little internal pat on the back.

Just then, a young female jogger came up behind her, passing her seemingly without effort, running with a far more graceful, easy stride than she could ever hope for in her condition. She burst out laughing.

Laughing, because she had been so proud! Her pride arose through comparing herself to other women her age and the “darkness” of their physical condition. But getting smoked by a “ninety pound Disney princess” (Sue’s words) who effortlessly breezed passed her, whose physical “light” burned with much greater intensity, put her pride in perspective. She had been like a Pharisee praying next to Moses and Gandhi!

Sue laughed, rather than cried, at the revelation because she realized that there was no need to build herself up through comparison with others. All she really needed was the affirmation that she herself could run seven miles in the rain, no matter what others could or could not do. Every stride she took from that moment on was taken in gratitude, not pride.

Isn’t it interesting that both in the beginning of Sue’s story, and in the end of it, she felt affirmed? Only, the second, more humble affirmation was far more joyous and life-bearing than the first. Curiously, the second form of affirmation only came after an “ego smack-down,” as Sue called it.

When Jesus told his story about the Pharisee and the tax collector, I believe that his goal was not to condemn the Pharisee for being so self-righteous. Rather, his goal was to confront everyone who feels prideful about how much better they are than others, giving them an “ego smack-down” in order to show them that the light God sees in them was not increased through the darkness in others. The light in the Pharisee, like the light in the tax collector, was enough to be grateful for. I suspect Jesus’ aim was to get all such Pharisee’s laughing at themselves. In so doing, they joined their laughter with God’s own laughter. And God’s grace. Such a wonderful deal!