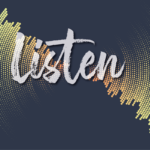 Listen!  Hearing That Still, Small Voice and Finding Your Own

This morning we’re going to consider those times when we yearn with all our might to hear a “word from the Lord,” and nothing comes.  It may seem strange to start a series on listening for God’s voice with a reflection on God’s silence, but sometimes God’s silence itself is a form of communication.  It can convey information that words have no ability to convey. God’s silence can provide answers through lack of an answer, and set us going in the right direction by offering no direction.

The Jewish tradition offers us one of the preeminent stories of God’s silence.  It came at a time when the prophet Elijah wanted most to hear God’s voice thundering from the heavens.  You may recall the story of Elijah and the cave. (1 Kings 19)

Before considering what happened there at the cave, it’s helpful to consider the cave itself.  According to 1 Kings 19:9, Elijah journeyed to Mt. Horeb, otherwise known as Mt. Sinai, where Moses had received the Ten Commandments.  There, he spent the night in “a cave,” according to the English translation.  In the Hebrew, however, it says that Elijah spent the night in “the cave.”

The Hebrew reads “the cave” because Elijah did not just spend the night in any cave, but in the very cave where, centuries earlier, Moses himself had stood with the intention of meeting God face-to-face.  Like Elijah, Moses had gone to this cave during a time of distress when he was particularly anxious to hear God’s voice plainly and clearly so that he could be most certain that he got the message right.

God told Moses that God’s glory would be too great for Moses to behold if he saw God’s face.  However, God apparently felt compassion for Moses, so God decided to give Moses a small glimpse rather than the full view.  Commanding Moses to stand at the cave’s mouth, God is said to have covered Moses’s eyes with God’s hand to protect him from seeing too much glory, then lifted God’s hand the moment after God had passed by.  What Elijah saw when God’s hand was lifted was God’s glorious … buttocks.

That’s right.  Moses beheld God’s behind.  To my knowledge, Moses is the only prophet in Israel’s history – probably the only human ever – to see God from this particular angle!  I don’t know exactly what message Moses received from the experience, but the message I would have taken away is: “If you’re not content with all the ways I have revealed myself to you already – through inner hunches and intuitions, and through the ways I reveal myself in community with others, and through Creation itself, then you can kiss my behind!”

This message may not be among the most encouraging that Moses ever received from the Lord, but it is one I wish more of us would give credence to today.  We tend to search for God in the big and the bold, the “supernatural” and flashy.  We want the clouds to part, a shaft of light to fall on our face from the sky, and a deep voice to fill the air that is unmistakably that of the Divine.  If God would come to us so clearly even once, we would never again doubt that God is both present and willing and able to help us in times of difficulty and distress.

In my experience, God seems to prefer subtlety over drama.  God speaks less through the spiritual equivalent of flashing neon signs than through flashes of intuition that arise from unknown depths within us – intuitions that we perceive as God’s presence and guidance more in hindsight than at the moment they occur.  Yet, even after long experience of God coming to me in precisely this way, there are still times when I shake my fist at the heavens and demand some sort of divine sign that I believe has been withheld from me.

Back to Elijah, he had to relearn this same lesson, standing at the mouth of Moses’s cave centuries later.  As the story goes, Elijah experienced a great wind, so strong that it was splitting mountains and breaking rocks in pieces, but the word of the Lord was not in the wind.  The wind was followed by an earthquake and then a great fire.  Significantly, all three of these phenomena of nature are signs regularly used in the Bible as metaphors for God’s voice, yet Elijah heard nothing from God.  In other words, the story is telling us that God did not show up at the very moments when Elijah most expected to hear from God.  Just when Elijah was about to give up and retreat into the darkness of the cave, the “word of the Lord” did, in fact, come to Elijah.  Only, it came in the form of the “still, small voice” of silence.

As I’ve observed before, the Hebrew words which we translate as “still, small voice” are actually untranslatable.  Literally, the Hebrew says that God’s voice was heard in “finely-powdered silence.”  It’s like the silence of gently falling snow.  You “hear” falling snow not through direct perception but by the way the acoustics around you subtly shift, producing an even deeper silence.

According to the story, Elijah eventually did hear a clear word from God, commanding him to go and anoint a particular person as the new king of Israel, and another the king of Aram.  He was also to anoint the prophet Elisha as his successor.

I find it interesting, however, that the storyteller chose to include all this prior stuff about Elijah not hearing God’s voice and the “finely powdered silence.”  Why not just tell us that Elijah visited a cave (or the cave, as the case may be) and heard God’s commands?

My guess is that we’re told about God’s silence before God’s message because the silence itself is meant to convey an important message.  Given that most of us experience God’s silence far more than God’s voice, then what the storyteller is trying to convey through this strange little story of God’s silence is every bit as important as the message Elijah eventually hears, if not more so.  If so, what might that message be?

2. Silence in the Canyon

In early July, I found myself sitting on the porch of a small home nestled in a forested canyon that overlooks the town of Juneau, Alaska.  I had rented the home to work on a new book during the day and, at night, visit my eldest daughter Arianna, who lives in Juneau.

One night, Arianna and I enjoyed a dinner featuring halibut we had caught earlier in the week.  Though it was late when she left, I decided to get back to work on my book, which is exploring the relationship between Christianity, Judaism, and Islam.  The book was harder to write than I anticipated.  Having written and discarded 13 different introductions to the book, I found myself in need of a late night “chat with the Lord,” hoping it might set me in the right direction.

With a population of just under 30,000, Juneau is no metropolis.  Still, it is several times larger than most Alaskan cities – especially when five cruise ships are tied up at the docks, as they were that night.  While the summer sun hung in the sky for much of the evening, now it had descended behind the mountains overlooking the bay across from Juneau.  Were it not for the soft glow emanating from the windows of a handful of nearby homes, and the faint gleam of Juneau’s street lights below, the only objects plainly visible would have been the tree tops lining the canyon’s edge.

What impressed me on this particular evening was how close I was to the city below yet how silent the canyon was surrounding me.  As a native of the Pacific Northwest, I am quite familiar with the distinctive quality of this form of silence, though it had been quite some time since I last “heard” it.

It may seem strange to describe one form of silence as “sounding” different than any other form.  Yet it does.  There is a qualitative difference between silence that is created by the absence of sound and silence that is the result of the absorption of sound.  One kind of silence is created by emptiness, the other kind by fullness.  Here on the porch, the noises of the city below were being absorbed by the boughs of several thousand Sitka Spruce and Western Hemlock trees blanketing the canyon.  I felt the silence more than I “heard” it.  This kind of silence is the silence of presence.

A slight breeze crossed my face and I found my thoughts drifting to the profound relationship that the Abrahamic faiths have with silence.  An old Muslim sage described silence as “the first stage of worship.” (Makarim al-Akhlaq v. 2, no. 377) Deep silence, like worship itself, is evoked not simply when the Divine is present to you, but when you are present to the Divine. When you let go of all the thoughts racing through your head about the bills that must be paid and the chores on your “to do” list, and the book introduction that needs to be written, and simply show up, that’s when God shows up, silently whispering to the ear within your ear.

This Muslim sage’s idea of silence being the first stage of worship is connected to the Islamic view of God’s Creation itself.  According to the Qur’an, everything in God’s Creation is actively engaged in prayer, worship, and glorification of their Creator at each and every moment. (Qur’an 24:41)

It is the same understanding reflected in the Jewish scriptures proclaiming that the trees are clapping their hands and shouting God’s praise. (Isaiah 55:12) And it is the same understanding held by Jesus who reminds us that not so much as a sparrow falls to the ground outside of God’s knowledge and awareness, and that even the hairs of your head are numbered.  (Luke 12:6-7) To be present to Creation, therefore, is to be present to entities that are actively engaged in worshipping their Creator.

It is hard to feel alone in this kind of silence.  This kind of silence is created not so much by absence but by presence.  I wish I could say that the “word of the Lord” came to me while sitting silently on my porch, inspiring me to write page after page of brilliant material, but God was as silent as my surroundings.  It didn’t really matter.  In times when I am distressed and seeking answers, I often find that what I need most is not answers, but stillness.  Within the stillness, I rediscover God, and the quiet assurance that I am not alone.

I think this quiet assurance of God’s presence is what Elijah needed to “hear” before Elijah could really hear the many things that God would eventually tell him.  In this respect, our relationship with God is kind of like our relationship with a life partner.  Our partner can tell us many things that go in one ear and out the other. But when our partner starts by first putting their arms around us and whispering “I love you,” then we’re all ears.  If you want your partner’s ear, start by giving your heart.

Why not find your version of Elijah’s cave this week?  Find a place that is free of distraction and full of nature and go there every day.  Like Elijah, come to that place with your pressing questions and your urgent requests.  But then just give God your heart expecting nothing in return. Perhaps your prayers will be answered.  Yet if all you receive back is silence, know that sometimes silence is not so very silent, and emptiness is not as empty as it seems.

← The Faith of Jesus in a Pluralistic World Part 9: Labor Day In the Kingdom of God Confirmation Class September 11, 2019 →